Ah, the idiot box, our childhood companion/minder let us speak of your marvellous ways and bask in your shiny technicolour.
Post Reply
63 posts

Too be fair, they aired it years ago

But apparently it's not banned as I though...

A google search brings up nothing about it being banned... though some are surprised it isn't
Top 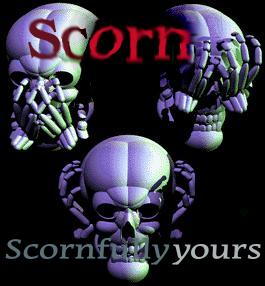 Yea...i need to see it, it's really crazy

Told ppl about it at work, now they call me psycho o.0
Top

I didn't like Death note, I though the main character like totally jumped the shark right at the first episode when he went from mild mannered kid who was clearly frightened by the death note to a Megolmanic psycho with delusions of Godhood in the space of an add break.
Last edited by Mik on Wed Feb 28, 2007 9:27 am, edited 1 time in total.
Top

Lastwolf wrote:I didn't like Death note, I though the main character like totally jumped the shark right at the first episode when he went from mild mannered kid who was clearly frightened by the death note to a Megolmanic psycho with delusions of Godhood in the space of an add break.

You might think its weird for a first episode, but that's because you're just being introduced to the character. While he starts off a blank slate to you, when they start the anime he already has his characteristics defined. You just don't begin to see those until you watch more of it

He's frightened as anyone else would be in that situation. It's like having your concept of reality turned upside down. Notice by the end of the first episode so many people had died? My guess is that the more he did it the more he became convinced that he was the only one who could exercise proper judgment on those who'd break the law. He started out afraid, but being fascinated with the power he had.. He became intoxicated with itt.

It doesn't tell you in this episode but he has a very strong sense of justice. You kind of learn why after a few episodes when you meet his family. I really shouldn't be talking much more as it can really spoil the experience for those who want to see it
Last edited by PWX on Thu Mar 01, 2007 2:33 am, edited 1 time in total.
Top

yeah, a friend of mine is a big anime nut and tells me I should stick with it cause it gets awesome, but to me it was 'Omg I can kill people!, this is soo messed up' 12 seconds later 'I'm taking over the world, MWAH. all shall bow to me as a GOD!!!'
Top

Death Note's kinda like Naruto in that aspect to me.
I like the manga better then the animes.

They just both make me really laugh. Sousuke Sagara is the best character ever.
It's not really something to watch for the Slave Arm battles though. More something to appease a guy who wouldn't want to have to sit through the girly bits.
Top

I keep meaning to watch full metal panic! i have heard its quite good. I must mind to down ..... to aquire it

thanks for remembeing me lol
Top

I don't like reading mangas. They make me want to give 1000 paper cuts to some poor bastard. Anyway, including games:

You like all that Ghibli stuff but have you seen My Neighbour Totoro? You must get it! It makes me want to have a kid just so I can show it to them. This is what kids TV should be like.
Top

I tell ya Hayao Miyazaki is awesome sauce, lol. Seriously, his stuff blows me away, always has me in tears. I don't think a film has ever done that.
Top

Kimi ga Nozomu Eien ( the first series, not the crappy second one )

EDIT: I take back what I said about the second series *wipes tear from eye*