Your Thoughts on Battlestar Galactica

Ah, the idiot box, our childhood companion/minder let us speak of your marvellous ways and bask in your shiny technicolour.
Post Reply
39 posts

I have to disagree with you Ben, just because they change things to have a continuation of a story they want to work with doesn't make it bad.

They made a few changes from the Stargate movie to the series but it didn't affect it being an awesome series. I personally think it would be hard to take everything straight from someone elses end of a story point. They wouldn't be your ideas and how can you predict the direction he wanted you to take it to.

So what if they reused the name? How many Cid's are in FF? Or wedge and Bigg.
Top

not bad maybe, but lame.

And you can't compare the Cid thing and the Biggs and Wedge thing to this. Those are just minor details, and the worlds they are usualy in are totaly different. It's more of a comic asside then any real plot related issue. This is a complete character overhaul to the point where it's really nothing like the original character. And it's a main character. As such, i definatly feel they should have gotten different names.

Perhaps it dosn't break the series. Perhaps it dosn't ruin anything, but i think it's very dumb and pointless. I think it's funny that Mik mentioned Star Trek because that's a great example of how this should have been done. You change some things, adjust the time line, and use different characters and give them original names. It wouldn't have been hard to do at all and would have given fans of the original something to smile about, and allowed room for clever crossovers. Now, with a remake that isn't even a real remake, you destroy all that potential.

I just think it was dumb.
Top

I'd let you borrow the boxed set Ben, but I'm a little farther away than most of your other friends. Just download them.

What I love about BSG is the realism factor. There are no Aliens, no trade wars or mystical, magical force that binds everything in the universe together . . .it's just gritty and real. Almost coldly logical with how the Cylons hunt down the Humans, and the type of trauma and problems that would beset survivors of the human race if something happened like this in the real world (well, real world in the future . . . if it was the same .... well maybe ..... DAMN IT Ben just watch it!)
Top

No, Star Trek is a horrible example, they ruined there IP and the prequel was a clear sign of desperation, they had no new idea's, I loved TNG and DS9 post season 2, I watched Voyager because of Jeri Ryan and Enterprise was boring. Also it has one of the worse timeline/ continuity problems I've seen since Legacy of Kain, none of that shit makes sense any more.


TNS is a new beast, with completely different angle on the theme of the survival of humanity against Cylon aggressors, I look forward to every new episode with a hunger you'll just have to forgive them for using some artsic license.

They kill a baby in the first fifteen minutes.

There are no Aliens, no trade wars or mystical, magical force that binds everything in the universe together

Not according to the Cylons


DAMN IT Ben just watch it!

He'll prolly see the Cylons a pop at him because they are robots that worship 1 god.
Top

I think Star Trek did well with original and Next Generation, but yeah, the rest was crap on a stick.
Top

They kill a baby in the first fifteen minutes.

And they effectively destroy all of Humanity in about 25 minutes. You can't beat massive thermonuclear war.
Top

Well, since I LIVE in Japan, I have NO FREAKING IDEA what's going on in Season three. Is it almost over? I am anxiously waiting for the DVD boxed set to be released so I can buy it. Does anybody have a good guess as to when they will release the DVDs? :blink:
Top

Yeah I think there is 2 episodes left, I gotta say I don't think it'll have an awsome finale as seaon 1 or 2, I hate those dicks that cry that the writters have lost it. It happens in every series if you go beyond 1 season people bitch, that the ones before was far better. But I can't see where they are going with all this.

Although I am enjoying the fact I'm not sure which direction the decision will go, usually in this kinda show it's fairly clear that they have to go a certain direction (for example the good guy can't really die) with Battlestar I'm not so sure.

Season 4 has been confirmed at a reduced 13 episodes (down from 22) but there is also a 2 hour movie special confirmed (a la the mini series that started the show). I'm not sure where it fits in, it might be 4.5 or briding the gap between season 3 and 4.
Top

Should they end it at 4 seasons? I think so. Don't get money hungry. Maybe 5 would be the max. They can always do a movie after they find Earth. It would be cool if the Cylons had this gigantic mobile fortress and the movie ends with a new fleet of Battlestar like ships from Earth and blowing the hell out of it in an all out final battle. Don't you think so?
Top

As sad for me to admit this as it is, I think we've missed the massive space battles, I swear 4.01 abd 4.02 had one protracted massive space battle, 4 or 5 BaseStars vs Galatica and Pegasus, I think they blew the fx budget on those two episodes. It was jaw droppingly awesome in all it's splendor, the 'Adama' Manoeuvre had me yipping and air punching like a young pup.

I think the major problem is that the Cylons aren't as scary as they used to be, like all monsters, implied threat is greater than quanitified threat. The better monster movies you rarely see the whole beast and never in the light of day. Aliens, Predator, American Werewolf in London all hid there monster, you saw it's effects but rarely it.

When you don't know what they are doing or who they are or when they'll come it's a terrifying prospect. When you know they aren't the unifed Human death bell ringing, they loose the mystic of terror. Heck we even start to be sympatheic to them and them killing 99% of humanity in a single day was along time ago, we sometimes forget.


I'd like the show to end without losing it's intergrity however, I hope it's not for a while yet, I tune in (wait for the Rip and download) like an eager sonvabitch every Monday afternoon. I'd miss it, if it was gone.
Last edited by Mik on Wed Mar 14, 2007 9:08 am, edited 1 time in total.
Top

Perhaps the Cylons will find Earth first, realize they are outgunned and outmanned, and send a transmission to the remainder of the Cylons for one all out battle to end this all. They could be chasing down the entire fleet and picking them off one by one . . .hmmmm.
Top 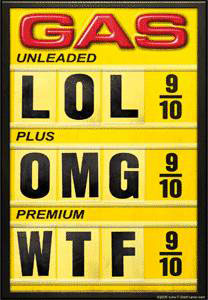 i thought this show was rather good from the moment i saw the pilot mini-series. watched it straight through nearly every episode up to season 3. after that i kinda lost interest cause it seemed like the shows were starting to just get repetitious. on noes it's the cylons again, run or kill them all. sometimes both. don't get me wrong, the show has some rather new twists to it which were interesting but for me it just lost it's staying power. all in all, it is a good show and it had a great start plus a damn good cast which is what's made it such a hit. the only problem now is keeping it original, that's slowly fading though just like with any tv series.

i may watch it again at some point just to see what i've missed and whether or not if it's gotten better since last i saw it. but i don't hold much hope for it considering what they did with the stargate tv shows. all good things are bound to end sadly.
Top

Every week I go away impressed over something, Anything that comes from Pappa Adama is usually awesome.

No-one has seen the Cylons since around episode 12 or something, Apparently in the 2 part finale they come back 'in force' so that should be fun.
Top